Strange is good. It’s ecclectic…it’s bizarre. So is fashion. Fashion types have always been prone to being a bit unconventional. Take a look at John Galliano…or absolutely ANYTHING that Bjork wears. Not only is fashion open to interpretation, but so are toys. Gone are the days of a simple tennis ball or fetching stick for dogs. In 2012, dog toys are not just something for your pampered pup to play with – they’re expressions of pet parents and how truly bizarre they really are! With dog toys that are more perplexing that wacky waving arm-flailing inflatable tube men to toys that would make your grandmother cover her mouth and say “Heavens to Betsy!”, here are 5 toys that are, umm…different.

Let us preface this by saying that when man has been lonely and he needs umm…”companionship”, he has the option of turning to non-living sources, like our friend Marcie here. We are not here to judge…or speculate.

I’m not sure if this is cool or twisted, but it definitely tops our WEIRD list:

Can you believe that someone, French of course, has invented a blow up doll JUST for dogs? 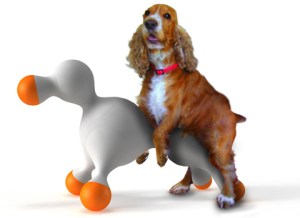 Ladies and gentlemen, meet the HOT DOLL. Advertised as the “first sex toy and companion for your dog” with a very elitist slogan: “for trendy dogs only”.

Like the needs of most men, an attractive face is not required and with black and white options, your dog can choose if they want cream in their coffee or they’d prefer some dark chocolate!

If your pooch needs to relieve some tension or just feels the need to do a little dominating,  this is a perfect choice. 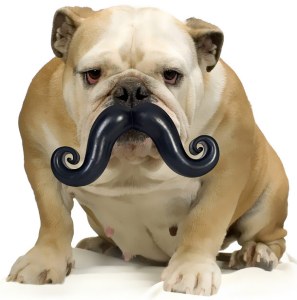 Think about the audacity of this: someone thinks of a ball…looks like something The Gimp bit on in “Pulp Fiction”…and puts a mustache on the other side of it. Dogs love to chew on it, and it looks freakin’ hilarious.

What’s bizarre about this is how many reviews we’ve seen where dogs become obsessed with this toy…like, we’re talking Linus and his blanket OBSESSED. We just think it’s funny, and with it being under $10, why not? If stashes aren’t your dog’s schtick, they also have a line of beards, lips and tongues. With this toy, you get the benefit of your dog becoming an instant entertainer and your dog gets some nice black balls to play with. Yes, we are TOTALLY aware of how that sounded.

We have heard the expression “take a bite out of crime”…but “take a bite out of the 44th President of the United States of America”? Stranger things have happened. Yes, he’s just won his second term. What better way to celebrate than to be gnawed on by an excited group of bitches? This very unflattering likeliness of President Barack Obama wearing his fabulous OBAMALICIOUS sweater looks more like the love child of George W. Bush and Mush Mouth from “Fat Albert and the Cosby Kids”. In other words, it’s fantastic.

Here’s the Roswell thing about it: it’s been discontinued. Fat Cat Inc. (the company that made it), doesn’t even feature it on their site anymore. You can’t find it on eBay…or Amazon. Personally, we think they were purchased in bulk for Bo Obama’s next birthday bash. 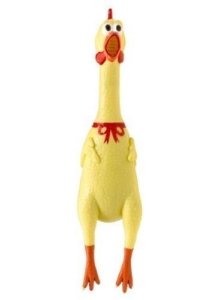 Is it just us, or does this chicken look a little like Marcie from our Love Doll post above? Freaky resemblance.

So here we have a rubber chicken. I bet you’re thinking, what the heck is so weird about a rubber chicken? Well, what if every time your dog bit down on it, it gave a twisted 10 second shriek with every single bite? We found a great YouTube video of a similar model here.

For $7.99, it’s fun for your dog, hilarious for you…although it may drive you absolutely insane. Buy it for the frenimies in your life with dogs. 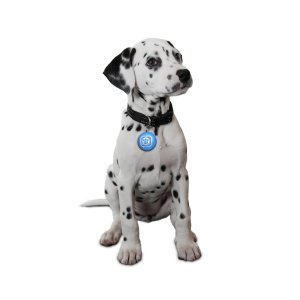 Yes, we have come to an age where dogs have engaged in social media! This device attaches to your dog’s collar and is pre-programmed with 500 different tweets. When your dog barks, walks, runs, or even takes a nap, this device will tweet accordingly – so yes, you can stay in touch with your dog via Twitter while you’re at work, or on a hot date. Nothing says you’re a catch like tweeting with your pet.

As a realistic pet lover, I do wonder: instead of tweets like “am I wagging my tail or is my tail wagging me…think about it”, why don’t they put what dogs would REALLY say like: “only a real bitch has the balls to destroy the garbage” or “nothing says afternoon snack like chewing on my best friend’s 3 day old fruit of the looms”.

READ COMMENTS / LEAVE YOURS BELOW:

Join Our Pack, Pride or Flock!

Get Our Best Stories on FB!