5 Divalicious Ways Your Dog Can Do Halloween

Okay…like you I’ve seen my share of nub-tailed pugs with pink tutus and dachshunds dressed as hot dogs, but let’s be frank here (no pun intended) – you don’t need to be a pure-bred bitch to be a DIVA!   Some of the greatest divas of all time come out at Halloween in pup-form.  Although we couldn’t find any Joan Crawford costumes toting a wire hanger, we did find some hilarious Divalicious looks that perhaps your pup can pull off this Halloween.  If all else fails, let your dog go out sans costume and if anyone asks where’s her costume, you can answer: “she IS dressed up for Halloween…she’s Miley Cyrus” 😉 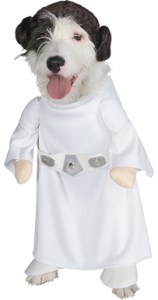 I don’t care how old you are, or how you may perceive Ms. Carrie Fisher, but with your dog dragging as Princess Leia, you can’t go wrong. Whether you know her as the voice of Peter Griffin’s boss on Family Guy, or like me, you remember her sashaying with a lightsaber complete with faux English accent in the Star Wars trilogy; Princess Leia was the best symbol of female empowerment since Rosie the Riveter.

Likely to attract: men who bear a striking resemblance to Paul Simon, people born in the 70’s, and cool nerds (they have money from their comic collections so they may buy you a random coffee from Starbucks for allowing them to be photographed with your dog) 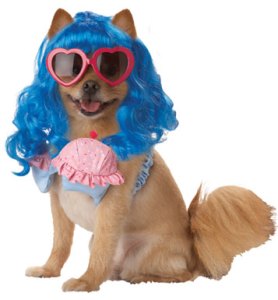 She looks like Paula Dean. She kissed a girl and she liked it. She was married to Russell Brand and is the only artist ever to spend over one year (69 weeks to be exact) on Billboard’s Top 100 (what a pathetic fact…that’s a Halloween scare in itself). She’s instantly identifiable to people from the ages of 4-40 and she makes a living dressing up as candy, licking lollipops and singing annoyingly catchy tunes…not a bad gig. 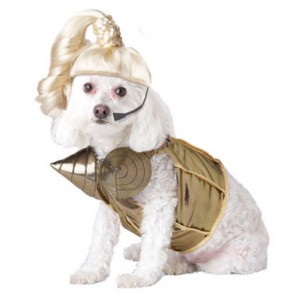 She’s 54 and she looks better than you…or me…or most people 30 years younger than her. Seriously friend, there can be no mistake when dressing your dog as her Madgesty. Actions speak louder than words…actually, cone bras and microphones speak louder than words. Going Madge is certain to be “Vogue”! 20 something year old arm candy not included. 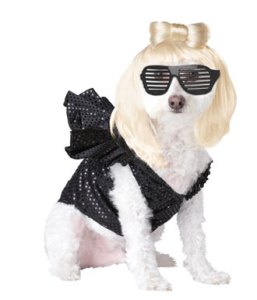 She’s quirky. She’s bizarre. She wears raw meat and her piano is a giant high heel shoe for gosh sakes. If you or your dog is eccentric in any way shape or form, please go Gaga this year. It’ll scratch the itch, ride the hype and it’s cheaper than therapy. 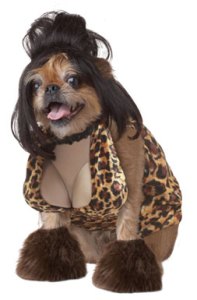 I’ve never watched an episode of Jersey Shore in my entire life, but I know who Snooki is. Even moms know who Snooki is. Regardless of who you are, what you do or what you believe, you simply must admit that dressing your dog as Snooki is an INSTANT showstopper that would bring a smile to anyone’s face…and at the end of the day, isn’t that all that our pets want…to see us happy, even if it means going trashy for one night??? BONUS FEATURE: ladies can reuse the implants in their bras and gents, congratulations: you get two cushions for your jock strap Johnny can dress up too.

Likely to attract: absolutely ANYONE with a sense of humour and other dogs with compromised standards

READ COMMENTS / LEAVE YOURS BELOW:

Join Our Pack, Pride or Flock!

Get Our Best Stories on FB!